"The mission of the National Law Enforcement Officers Memorial Fund is to generate increased public support for the law enforcement profession by permanently recording and appropriately commemorating the service and sacrifice of law enforcement officers; and to provide information that will help promote law enforcement safety." - NLEOMF

The mission of the Wounded Warrior Project is to honor and empower Wounded Warriors. Their vision is to foster the most successful, well-adjusted generation of wounded service members in our nation's history. - WWP

"We're providing programs that lead to self-sufficiency and foster independence for individuals, families and seniors living in Carrollton, Farmers Branch, Addison, Coppell and a portion of the city of Dallas in Denton County. Our dedicated network of donors, sponsors and volunteers make our community better!" - Metrocrest Services

"When a police officer is killed, it's not an agency that loses an officer, it's an entire nation."
- Chris Cosgriff, ODMP Founder

Our mission is to honor the service and sacrifice of all law enforcement officers that have died in the line of duty. We believe that those officers who’ve given up their lives in service to their community should never be forgotten. Likewise, we believe those people these brave heroes have left behind deserve and need our support.
- Team Texas

The mission of the Wounded Warrior Project is to honor and empower Wounded Warriors. Their vision is to foster the most successful, well-adjusted generation of wounded service members in our nation's history. -On May 14, 1983, on the eve of the second annual National Peace Officers' Memorial Service, ten young widows gathered around a table and talked about the tragedies that had fallen on their families that year and truly shattered their lives. Each and every widow had suffered the loss of their law enforcement spouse in the line of duty.

After hours of sharing their burden of grief and their tales of abandonment by the law enforcement agency, a young widow from Eau Claire, WI, Lynn Bolton (now BeBeau) approached Suzie Sawyer, then FOP Auxiliary National Secretary and Memorial Service Coordinator, and stated, "This is the greatest thing that has happened to me in the past year. I have finally found people who understand what I am having to deal with. That was the birth of the concept of Concerns of Police Survivors, Inc. (C.O.P.S.), which was officially organized on May 14, 1984. - COPS

Hallie was born with DBA, but she wasn't diagnosed until she was 13 months old. After they found it, they were able to control it with steroids and blood transfusions. If you looked at Hallie, you would have never known she was sick. But look at her blood, and you would know. The only cure for DBA is a bone marrow transplant. And so Hallie's search began...
Learn more

The National 9-99 Police and Sheriff Foundation raises funds for injured or fallen officers and their families, invests in K9 safety and training, and provides counseling and mental health resources to all officers in need.
Learn more

To help us better serve you and our community we share, please feel free to join our mission by participating in any of our events or donating toward our cause. 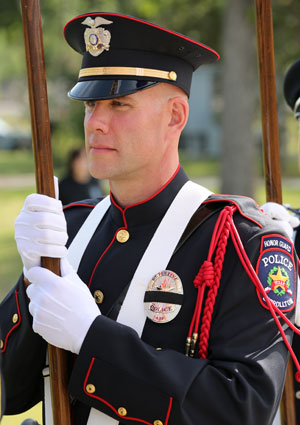